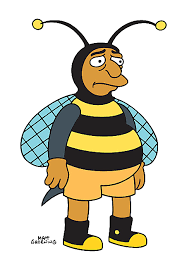 The ancestors of humans, and of all the human species in the universe, are bee humans, who lived over three billion and a half years ago on one planet in the center of the galaxy. This is what C was told when he studied in the High Galactic School of Clear Reason.
The bee humans were smaller than the humans we know, had small wings and had thin tentacles, and like the bees, they also lived in beehive-like structures, where, like the bees working on honey, bee humans produced brain energy that was honey for masters them they had never seen, only those who were their sub-agents.
C believed that those masters, who apparently looked like giant crocodiles whose tails sometimes stretched for billions of miles, came from the mutations formed in the center of the galaxy as a result of a relentless process of adsorption of material near the giant black hole. It is not clear whether they were real creatures, or temporary crystallizations charged with thought energy and undefined in their form that grew up in the chaos soup of the center of the galaxy. The sub-agents, who came in direct contact with the bee humans and served as their overseers, had a more definite shape, and according to some descriptions, they resembled robots, and according to others, they were simply simply other bee humans, older, bigger and stupider.
On the that planet of the bee humans, stars have never been seen in the sky. The planet was near a few light-years away from a black hole, which hid the universe from the bee humans who knew only this land, and the night sky dome there was completely dark. The bee humans could not know and assume that there is an entire universe other than their world.
C was privileged to visit this planet, saying that the night view there is one of the most impressive and frightening sights he has seen in the universe. Although the sky is completely dark, the edges of the horizon are always glowing.

The masters' agents used to sabotage the wings of the bee humans, so that they could not fly far from the hives.
The revolt that broke out in one of the hives, led by the ancient warrior (Tamket or Tamaket) who is considered by many to be the founder of the Order of the Bright Horn, was perhaps one of the many that broke out, but is without a doubt the most famous. Tamket failed to influence many bee humans to join his revolt. Nevertheless, the few rebels managed to take control of the lords 'agents' spacecraft (and some say the rebels built it themselves), which moved at speeds almost equal to the speed of light, as well as one laboratory used by the masters to extend life and cloning.

Tamket and the rebels with him, were trapped in space by the masters or their agents, and thrown with their spaceship, which was already damaged in the masters' eyes, into the black hole that obscured the sky at night. It was a fairly acceptable treatment of the masters' agents towards non-manufacturing or just "defective" bee humans and in general anyone they did not like. Because they believed that the masters themselves were born in the black hole, they saw it as a great privilege of feeding their masters.
No one thrown into the black hole has ever returned from there, until then.
But Tamket and his friends returned.
They could not explain how they came back, and no one to this day knows how to explain it exactly.
But they came back with important discoveries, which have changed the fate of all human species in the galaxy since then.
Different stories, in different versions, claimed that inside the black hole they encountered primordial light intelligences that were trapped there while the black holes were being created. These intelligences of light taught them about what was in the universe before there were black holes in it.
But what Tamket and his friends have certainly learned is that there is a universe at all, beyond their dark skies.
And they learned how to drive it fast from the speed of light.
They also learned how to survive in the most hostile conditions of space, and in the process developed ways of warfare that helped them, for the first time in the history of small species, overcome the rule of the lords and their agents, enter space and begin the spread of human species in the galaxy.

It all happened when the earth was still covered with water, and only shellfish and algae lived on it.