As I said, Chapa was not the only source of information we had about external worlds. At the same time, and even before that, we received information from another source that I call PLANET N. The "stolen" Stoli, who came to us two years and a half months before Chapa, received messages from there through his antennas. He was constantly building antennas, in his filthy rooms, and apart from transmitting "smash-parades" through, it seemed to have actually picked up something. For example what Stoli called "space music", which he tried over time, with a band called Stolens Of Swing adapting to computerized Earth instruments. And besides, there were broadcasts of PLANET N, which was also known to other members. PLANET N broadcasts also talked about federations (neither Chapa nor PLANET N used that word, Chapa had his own word, and we translated PLANET N's word for 'alliance') and cosmic war (and all this before the first Star Wars movie came out). And yet there were some significant differences between the narratives presented by the two sources. The main difference for us, is that the stories of PLANET N talked about the participation of people from Earth in the war, while Chapa claimed from the first day, right after Zvi, Stoli and I met him physically, that he is the only one from Earth who was there and came back, and that even the possibility he was given to return to Earth from space after being abducted for research purposes is not obvious, and only the special relationships he created in the worlds of his captors, especially with 'The Blue', allowed him to return. After he made this claim, we did not want, for various reasons, to confront him with the stories of PLANET N which we too have already begun to doubt, still those stories also kept coming and we were dealing with it in parallel with Chapa's things. (Years later, Shefa, a man who joined Chapa's groups in the 2000s, claimed to have heard stories that Chapa did not return to Earth alone but had other passengers with him. I promised him that at least when we met him, he was completely alone).

Besides, the PLANET N broadcasts were not actually talking about one federation but about two federations fighting each other. Chapa argued (when we indirectly tried to know if he knew the PLANET N federations' narrative) that the federation had no rival in its size, its wars were against various guerrilla forces, from different sources, who oppose the federation, usually near and outside the confines of the federation's space, and more internal forces, which usually try to restore the rules of government and society of before the federation, like the Priests of Dark Reason '- "the worst", but all of these have failed to unite their forces and produce a counter-federation to the one and only federation that Chapa knows, which already exists, in his estimation, a few hundred Earth years, at least. 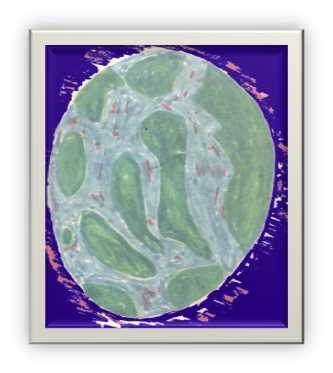 The federations that fought against each other according to PLANET N, were on the one hand the 'Alliance of the Green Planet' (it is PLANET N) – whose center is on a planet very similar to Earth – the "alliance of the good" and on the other side there was the "Union of Forces" or "The blue Alliance ",which was "he covenant of the wicked". " The two federations have been described as younger, much younger, than centuries federations, and the dates mentioned for their war were also different from Chapa's war dates. The war in Chapa's descriptions is, in the words of Yehuda Amichai, "a war that has never been enough – it is now elsewhere." PLANET N's war, at least as promised, was very close to an end.

When we tried to reconcile the two narratives, I believed that Chapa belonged to the Green Federation, and in this spirit I described his visit (based on the meager information he gave about a mission he had made for the Blue just before his return to Earth) to the Green Planet, the one where everyone gets together and gathers and believes in their ability to transmit love to the universe (winds that came in the Sixties, according to the PLANET N version, were transmitted to Earth from places associated with this federation), Its location could fit, in very general terms, according to the coordinates of the journey described by Chapa, as deciphered by Zvi and Elton, in relation to the area of space he reached after the 'chimney'. I suggested that PLANET N is a federation project that Chapa did not know, because he had not been in this part of the universe all those years (until the Blue sent him there, from the 'chimney', to inform those who needed to announce that the revolution is on the way and join them to it). For various reasons related to Chapa's descriptions, it did not occur to me to think explicitly about the possibility that the PLANET N Federation is itself part of the same rebellion to which the Blue belongs, and that the "Evil Federation" is the central Federation government that this rebellion tried to overthrow.

Others doubted, in part because his friend was called "The Blue," in Chapa's affiliation to the 'good side' or to someone who can get in touch with them in the story of PLANET N. They were loyal to PLANET N and were full of suspicions and that was one of the reasons why we did not talk to Chapa about the issue.

Over the years, broadcasts from PLANET N stopped coming and even "the stolen" Stoli then questioned their credibility. It's not that the broadcasts were not real or  did not came from space, it's that what was told in was not real, "a cosmic soap opera, perhaps, that we took in it some kind of interactive part, or 'Star Wars' the alien version, probably produced by sources in the federation, the same federation of Chapa", Said Stoli who accepted my old position on the subject. It have to be said: What seemed unreal to us in the PLANET N stories, was not exactly the very idea that there were more people from Earth who were "taken." Although Chapa continued to believe that his case (and his two friends, who were abducted with him and were returned before him to Earth case) was unique, and if more people were "taken", they were in any case not taken outside the confines of the solar system. We were not sure.

One thing we were sure of: we belong to a group of few people, all over the world, who have received this information. No one received the information from Chapa except us, the gang of the parade ranks, and the information of PLANET N was presumably known to several dozen other people, not more, including those who allegedly participated in the cosmic war, on both sides. The authorities, we were sure, knew nothing, not that they did not try to obtain our knowledge, they tried, for example through the guys with the white jeeps that arrested Chapa in November 1978, but they were too much square and fixed in outdated patterns and methods, to reach comprehension of what lay before them, so at least we believed.