In his attempt to give us an explanation of what exactly they are, C would define them as 'life particles' or 'life atoms' or 'life units', and he said that they are simply found, here, there and everywhere, and each one carries a basic epitome of everything the concept 'LIFE' means for us, and that includes awareness and even emotion. To differentiate between them and the life forms as science today defines them, we call them 'life atoms', although there was some problem with this definition, since the concept we had about atoms or particles was that they were simpler than that, and very small. Their worlds seemed to us, especially after we dived into them, to be more complex, socially, mentally and emotionally, even more than the ‘human world’. We have seen, or perhaps experienced, their entire cities, some have said galaxies, and we have not been able to estimate their size. They could not be said to be small, not even huge. It was simply impossible to say anything about their dimensions, and C also later defined them as 'unlimited in size'. Someone asked if they might actually be pojections (avatars) of some form of the familiar life forms we have, perhaps of the trees, perhaps of bacteria, perhaps of cats, and even of spirits. C did not rule out the possibility, but said that in his opinion they are the ones who bring life with them, because they belong to the stardust, and it is the stardust that brings life to the "life-bearing" planets, all the time, even now. And maybe we're their avatars. He repeated that he had seen 'lifers' on every planet of the kind called "life-bearing" like Earth – or 'Tick-bearing organism', in the crude language used by some of his friends, who believed that every planet wherever it was was a living organism, and from the fact that these 'atoms of life' are in it, it can be identified that the planet is like that. C incidentally counted 2400 "Tick-bearing organisms" which he visited during his federation years, all outside the solar system, which precisely on its other planets did not have time to visit. "But there is life on Mars, and even on the moon," he told us, explaining that even the cameras that took pictures from there show him things that our eyes do not see.We asked him what life he meant – and he said that 'life atoms' are a sign of life in the ‘common’ sense. 'If there are these there are these. In most places. Later he identified life in other places in the system, some surprising, but we'll save that for another time). Someone suggested the possibility that these are seeds, cosmic seeds, perhaps the seeds of the seeds. C liked the idea, and said they might come from another big bang, a big bang in another universe.  And a meeting with them, C arranged for us on November 8, at "the stolen" Stoli's room, and said to come prepared and take it seriously, because this is going to be our first meeting with a life outside of us, which we were not told about before. He asked us not to come straight to "the stolen" Stoli but to a meeting point he had set, quite far away. From the same place we will walk. We realized that walking is part of a process designed to 'cleanse' us and direct us to something that without this preparation, we will miss it. He also asked from anyone who uses any drugs, to be 'clean' for at least a week. Because at least for the first meeting, it's important to come clear.

I never knew how many people there were in our group, I always saw between 15-20, sometimes there were 25 or a little more, but there was always a feeling that the number of friends in each meeting was greater, that there were more with us, and the stolen Stoli said there were also those living farer away, that communicate with us and we feel them. He knows, because he gets ratings from them for the punch hit-parade, which Stoli insisted that whoever hears it is broadcast, hears it in telepathy because it is not broadcast otherwise. Even the distant rankings, he said, are received by him telepathically and once he showed me the deleted board on which the ratings appear, and other things as well.

The first annual parade, he said, was rated by 111 people, a number in which I used alternative history in a story that described the fateful vote we made whether to stay on the Greek island or return to normal time. I had never seen such a number of guys, but that day, at the meeting point, the feeling as if there was more to it than the number my eyes counted, which was also over 30, was stronger than usual. I thought some of them were friends of friends of friends who sneaked in when they heard about the event. C did not forbid us to bring more friends, he almost implicitly recommended that we not bring, and the members seemed to get it. At this meeting, I was not sure of it, but it could not explain the presence felt there. And for all of us C made it a hard work to walk fast from the meeting point, near some tall building, on a route that was quite similar to the route we walked at the first time, especially in the last section where Zvi and I returned on foot and Stoli and C continued with the motorcycle. The time was between 5 and 6 P.M, I was between the school race where I participated 4 days before the training camp at Beit Lid which came 5 days later, so pretty soon I was in a group that opened a gap and almost stuck to C, but we also failed to get it, and he did not even seem effortful  The stolen Stoli went in the rearguard to ensure everyone would get to his room and not get lost along the way. And it was only when we got to his room that I realized there was someone else who had been there all this time, and he made sure the door to the room was open when we got there, and maybe made sure for the rest of the things we saw. To this day I do not know who he, or they, were. 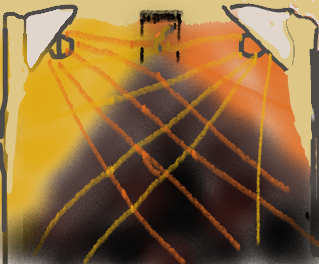 In front of the door of the stolen Stoli's room were two standing lamps that looked very old, the kind that old photographers used to have, with their flat lampshades facing each other at such angles that it seemed as if they were throwing darkness into the room, a darkness that they held it between them like a black sheet, but no it was not plain black, but something deeper like I had never seen before, something thick, with varying degrees, layers of blackness that have taken on dimensions .And there C directed us, like a bouncer in the cinema, to enter, into the blackest part and I did not know if it was in Stoli's room or in some other space that floated there, until the light of the lamps disappeared and in complete darkness I felt dizzy, everyone felt dizzy and we were trying to hold on to something. And we fell on huge and very comfortable pillows, so I knew we were indeed in Stoli's room, which the day before I had seen him carrying those pillows from where he carryied, and everyone found his place even though the room was not so big and I was not sure, to say the least, that it would absorb us all. But we all got along without anyone bumping into anyone, and then we noticed something like orange smoke rising from a hookah-like vessel and maybe a magic lamp that was in the middle of the room or the space that looked like a room. C's voice was heard saying something from a distance, maybe he said "space darkness", but I'm not sure. The darkness began to disintegrate into shadow figures running around us as if they were playing, and then they were no longer shadows but tangible figures around whom there was indeed a misty heavy darkness, but it faded away..The world was suddenly vanised, and we were inside another city, perhaps inside a 3-dimensions movie or of much more dimensios in it the lives of those figuers that I have not yet been able to focus on and define were buzzing. It felt like they and we had been living in this 'movie' for thousands of years. Group members tried to connect with them, join groups they created or play with, but for them we seemed to be shadows. I was still not sure if they had physical tangibility, when I tried to touch some object that was there my hand went through it and yet I felt something that was more like the smell than the feeling in the hand. But everything that was there was very familiar to me, as it always has been, and when I said that to myself I was suddenly about to realize something more, the final something, that for all of my life was hidden from under fog and suddenly was not, and then I felt like I was collapsing into myself. 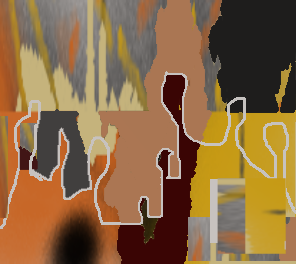 Then C dimmed the darkness and took everyone out of that world, well not everyone, completely, and we were back in the room with the huge pillows and a regular lamp shining from the ceiling. In the middle of the room on a small Arabian table was an orange ceramic vessel in the shape of an Aladdin lamp. In subsequent sessions with ‘the Lifers’, we did not need the magic lamp and the standing lamps to enter. C only said a few words and we already were entering their world, except for those who were already in it all the time.